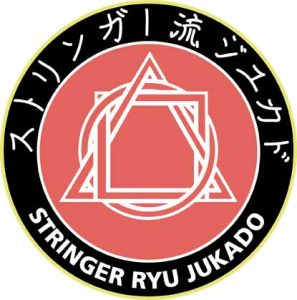 The idea for the triumvirate symbol of the Square, Circle and Triangle was inspired by a Zen painting in which the artist sought to express infinity. (See below)

If we examine the Stringer Jukado (SJKD) symbol we can see that each of the shapes forming the symbol are interlocked with each other and this in turn signifies the system itself.

The Circle binds all the shapes together, whilst representing the learning cycle and circle of knowledge which has no beginning or end but is continuous.

The Square pays homage to the ‘Dojo’ or ‘way place’ the training hall and also represents the mats we practice on as well as the formalisation of martial practice.

The Triangle links directly to the three tenets of martial practice, namely Kihon or technique practice, Kata or the practice of form and the attainment of technical proficiency and Kumite the combination of the preceding two elements into combative application.

The Triangle also links the SJKD system to the Kali / JKD / Jun Fan influences of Sifu Larry Hartsell and Guru Danny Inosanto. (Two of Soke Stringers teachers)The Triangle, also identifiable as the Greek letter Delta, is the mathematical symbol signifying change – as personal combat is constantly is a state of flux and change it is important that the triangle is an integral part of the SJKD symbol.

Therefore the interaction and linking of the three symbols signifies the infinite search for combative knowledge, to change, evolve and adapt in order to both improve our physical combative capabilities and to enhance our understanding of personal combat.

The SJKD triumvirate is displayed in white upon a red background surrounded by a black border. The black border represents the Black Belt which is what every new martial artist aspires to attain and really denotes when true learning within the martial arts begins. The SJKD Symbol in white denotes the beginner or novice grade whilst the red background denotes danger and acts as a warning as well as representing the masters belt at 10th Dan and the first true grade at 10th Kyu, again enforcing the circular nature of study within the martial arts. The system name is given in Japanese and English.